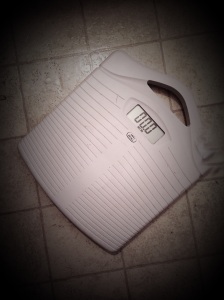 I’m not one who is much for making New Year’s resolutions. It might be because I typically reflect back and think forward at a different time of year . . . August and September, when the school year begins. Maybe it is because “everyone else is doing it,” and I enjoy being a little different. But it is most likely because I’m afraid of failure. I carry a lot of guilt when I set a goal and then fail to attain it, or worse, move backwards.

The Battle of the Bulge isn’t just an infamous battle fought during World War II; it also happens to be a regular occurrence at my house. A few years ago, I began a journey to lose weight and get healthy, under the Lord’s prodding. Since then, I have picked up some of my old bad habits. I was contemplating to set a “resolution” this year to lose weight (at least until my clothes fit again), but each week the terrible scale seems to flash its numbers as though mocking me.

On several occasions, I have made the resolution to read through the entire Bible in a year. I’m ashamed to admit that I have yet to complete this task. Don’t get me wrong, I read the Bible a lot (usually every day), but I’m afraid that there is something, a powerful verse I’ve never read or a nugget of truth that I’ve missed. As a Bible teacher, it embarrasses me that I haven’t read the Scriptures cover to cover, but every time I try, I become distracted. There is a setback. I’m behind, too far to make it in time.

So, I’m tempted to not set any resolutions. To give up on my goals before I have even started. Maybe you feel the same way. Then you need to hear and be reminded of these truths:

Is there a resolution or goal that you have been avoiding making? Why? Do you fear failure or what others will think? Consider revaluating. If your vision for change comes from the Lord, give it a second (or third or fourth) try. This time, don’t go it alone and revel in lots of God’s grace when you fall short (you will, we all do).

As for me, I’m once again tackling reading the Bible cover to cover. Like Ezra, I have “set my heart to study the Law of the LORD, and to do it and to teach his statues” (see Ezra 7:10). It may take me a little longer than a year (maybe even two) as I’ve already had to click the “catch up” button on my app a few times. But I don’t want to quit this time. I want to be a diligent student of His word, and I delight in sharing it with others. So, I’m inviting you to join me here on mariesmuse.com each week to find out what the Lord is teaching me and to dig into God’s word together! May God use you to be the extra encouragement I need to finish the race!

“Therefore, since we are surrounded by so great a cloud of witnesses, let us also lay aside every weight, and sin which clings so closely, and let us run with endurance the race that is set before us, looking to Jesus, the founder and perfecter of our faith.”

*For further study, go back and read the scriptures I mentioned here. Take time to meditate on how these truths apply to your life and journal your own goals for this year. End by spending time in prayer.*