“Joseph named his older son Manasseh, for he said, ‘God has made me forget all my troubles and everyone in my father’s family.’”

Are you familiar with the story of Joseph? As a child, you may have heard a story about the boy with the “coat of many colors.” Here’s a recap: Joseph was his father’s favorite (hence, the colorful coat given only to him). This made ten of his other brothers very jealous. One day, while his brothers were tending the sheep, Joseph came alone to check on them. They jumped him, thought of killing him but decided to sell him into slavery instead. Later, he was falsely accused by his master’s wife and thrown in prison. There, he helped a fellow prisoner, Pharaoh’s chief cupbearer. The cupbearer was soon released and promptly forgot about Joseph. Eventually, Joseph made it out of prison and into a position of power as Pharaoh’s right hand man.

Despised. Sold. Falsely accused. Abandoned. Did Joseph really forget all that?! Now married, he named his firstborn son Manasseh, meaning “causing to forget.”* But how could Joseph possibly just erase his memory and forget all the wrong that had been done him, all the hurt he experienced and all the time he had lost?

“The thief comes only to steal and kill and destroy.

I came that they may have life and have it abundantly.”

The MRI was clear. No new tumor growth. The cancer hadn’t come back. I should have been rejoicing. And part of me was. We had just been given another three months with Austin (until the next MRI). And he was growing stronger. His immune system no longer needed the preventive antibiotic. He would soon finish physical therapy after 15 long months. God was being glorified in his living, and all around me people were rejoicing with us. But part of me was grieving and frustrated. There were more side effects of surgery and treatment to consider. We already knew, aside from a miracle, his eyesight was permanently damaged (not even glasses could correct this). Now, we were being told he might never play football again (a longtime dream of his). He would need to be tested for thyroid and hormone imbalances and undergo another neuro-cognitive test to provide a new baseline (radiation does wonders to destroy a tumor but it is not selective and wreaks havoc to healthy parts of the brain as well). 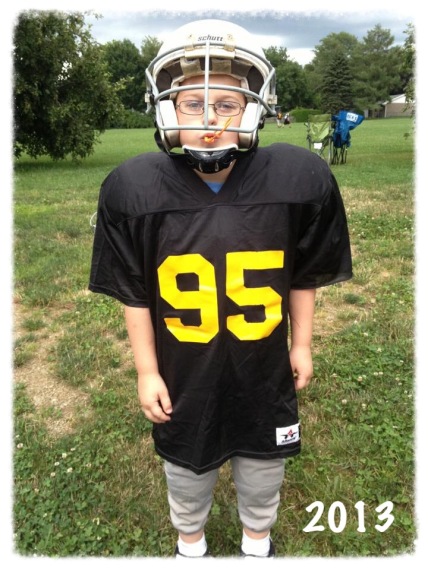 That day, I felt like cancer had robbed Austin of parts of his future, of his dreams, of ever being able to really enjoy a “normal” childhood. What else would it take? I wondered in my frustration and grief. For days afterward, I felt as though I was grieving a life that would never happen as I had imagined it. Outside, I tried to be happy, because I knew I should be, but inside, I was torn. I felt guilty because at least my son was still with us, but I couldn’t escape the ache in my heart that night as my son cried softly in his bed over lost dreams. How could I forget this hurt? How could he?

“Joseph named his son Ephraim, for he said, ‘God has made me fruitful in this land of my grief.’”

We know from the rest of Joseph’s story, that his introduction to fatherhood did not give him a sudden bout of amnesia. His brothers came to Egypt seeking Joseph’s help. Only they didn’t know it was him. They didn’t recognize their younger brother. Oh, but he remembered them – and what they had done. He even put them through a series of tests to see if their hearts had truly changed.

So what did he mean when he said, “God caused me to forget all my troubles?” I think the answer may be found in the name of his second born son – Ephraim, a form of a word meaning “double fruit.” Joseph was beginning to recognize what Paul would later write about in his letter to the church in Corinth: “For this light and momentary affliction is preparing for us an eternal weight of glory beyond all comparison” (2 Corinthians 4:17). The struggles of Joseph’s life lead him to be used as a tool to save an entire nation. But Joseph could also see God’s abundant blessings in his present life – and those were worth more than all the times of heartache. They were worth remembering.

“You have put more joy in my heart than they have when their grain and wine abound.”

At first, I was worried that Austin would grow bitter and discouraged over lost dreams, but I soon realized that he was better at “forgetting” than I was. His thoughts shifted to the things he still could do, and seldom, if ever, do I hear him wasting time worrying over the future and what the next test result might show. He is still a kid, don’t get me wrong, and has a lot of growing up to do. But his spiritual maturity surpasses that of many adults. What a privilege for him to learn at an early age the things that possess real, eternal value!

I don’t have to wait to see the Lord working in and using my children — because I am already watching it happen! No matter how long or short our lives on Earth, no matter how much the Enemy steals, I know God still offers abundant life with blessings and purposes so much bigger than our limited dreams!

“ . . . Therefore I will boast all the more gladly of my weaknesses, so that the power of Christ may rest upon me. For the sake of Christ, then, I am content with weaknesses, insults hardships, persecutions, and calamities. For when I am weak, then I am strong.”